If you've ever looked closely at an Army uniform, you will notice that soldiers wear patches on their shoulders. On the left shoulder is the soldier's Unit patch. This signifies the unit they are currently assigned to. Most of the time it's going to be at the divisional level; however, more and more are able to wear their battalion or even company insignia. Because I am in the 101st Airborne Division, I wear the historic "Screaming Eagle" patch, with the word "Airborne" just above the eagle, known as Ol' Abe.
However, it is on the right shoulder that a soldier's true pride shines bright, as this is where he or she wears the Combat patch. According to Army uniform regulations (AR 670-1), if a soldier serves a minimum of 30 days in a combat zone, he or she is allowed to wear the combat patch. Although in many cases it's the exact same patch, this signifies that the individual has served in a conflict zone, something practically every person in the Army has the ability to say nowadays. If you see a soldier with two different patches, this means that they deployed with one unit, but are currently assigned to another. There are thousands of people who fit into this category, with some continuing to wear their first (or even second) combat patch instead of the one to which they are currently assigned, mainly for personal reasons. One of my soldiers continues to wear his combat patch from the 1st Armored Division, as during his time there he lost his Squadron Commander to an IED. It's his way to honor his fallen comrades. 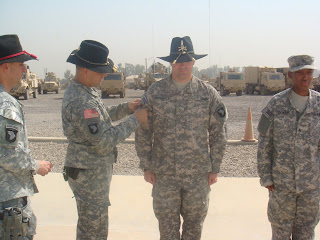 This past Wednesday, I was awarded my combat patch. Yes, it's about 40 days overdue, but nonetheless, I can now wear this patch on every uniform, for the rest of my time in the Army. Despite all the awards and medals that soldiers will accrue throughout their careers, I believe it's the combat patch that they wear with the most pride. It's an outward symbol to the world that we were willing, not only to GO into harms way, but also to LEAVE all the things we hold dear to us at home. Hope all is well and take care.
Posted by JC at Monday, September 08, 2008

What a handsome soldier! All I can say is, "it's about freakin' time". Love you, LT!

sweet hat man! I'm so glad you got it! Now you guys won't look like such baby lt's!

Reading this makes me think of my dad's khaki army uni that hung in his closet that he wore in Korea. I remember an Indian head on a star (I think), but I can't remember much else.

I'm gonna have to look for it next time I'm home. Thanks for reminding me that every little stitch on a soldier's uniform means something important.