For those of you who don't already know this about me, Fall is my favorite season of the year. Many might think that Spring is my favorite because of my passion for baseball. While I always enjoyed the game, it pales in comparison to my love of the many characteristics associated with Autumn. There are many signs that point to the changing of the seasons during this time of year and three of them I hold near and dear to my heart. First, the evenings begin to develop a cool, crisp breeze, where you're forced to put on a layer of sleeves to keep from getting the chills. Second, the changing of the leaves. At times, I don't think God has created a more beautiful sight than seeing the multitude of colors sprinkled throughout the landscape of East Tennessee. This final one is more idiosyncratic to my family, and something that I look forward to every weekend.....COLLEGE FOOTBALL, BABY!!!!
Yes, I admit it, I am a huge College Football fan; however, this is a trait that I believe I developed from my father. My dad was quite the "gunslinger" in his prime. Although his college career was cut short, I take pride in telling people that he was recruited by and signed with Ole Miss in 1971, following the end of the Archie Manning era. Moreover, my brother-in-law Jimmy played linebacker for two years at Marshall, before completing his career at West Virginia State University. About the only accolade I can boast of is being nicknamed Jesse "I won't fair catch the ball" Cragwall during my Senior year of high school. 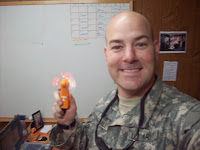 This weekend marks the beginning of the College season, and even though my beloved UT Vols aren't playing until Monday, this weekend is one I look forward to every year. It is also my father's birthday today, one that will be filled with funny family stories, great food, and the flipping of channels from one game to the next. It's moments like these that I cherish and long for while being over here, but I know I'll get my fill of it next year when we are all back together again.Monday is also my best friend Jeff's bday, so let's hope the Vols win one for the Freightrain! Take care.
Posted by JC at Saturday, August 30, 2008