One aspect of being an officer is that your are responsible for administering certain ceremonial sessions, such as an individual's enlistment, or RE-enlistment, also known as re-up. 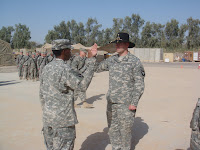 This past Thursday I was asked by one of my soldiers, SGT Booker, to administer her re-up oath. This might not seem like a big deal; but for many, this is a serious commitment, since they're signing away the next 3-6 years of their life away! What is more, soldiers are allowed to choose any commissioned officer to administer their oaths, and I was flattered that SGT Booker asked me! However, I think it helps that I'm a) her platoon leader and b) the only officer she comes into contact with on a regular basis. However, I have already been asked by another soldier, in another platoon for that matter, to administer his re-up oath; so, I can't use the above as my only excuses. 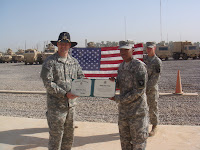 A big campaign for the Army right now (well, since the war began) has been to retain as many soldiers - not necessarily good, quality soldiers - as possible, since most have the experience needed to operate in this type of environment. So, I'll be performing this task somewhat frequently during my time in the service. It's a neat process and one that makes you feel like you're actually doing something, even if it's just uttering a few words and having the person repeat after you!
Take care and enjoy the pics.
Posted by JC at Sunday, October 12, 2008

brother, you shouldn't be suprised that people want to be around you. you're fun, easy-going, smart, energetic, and straight forward.

i love you!! can't wait to see you 'round these parts sometime soon.

take care of yourself bro,

This is really cool Jesse! No surprise that people would recognize your leadership and want you to lead them through this special ceremony!