Most men have a tendency to attach a female name to a piece of equipment they cherish. It might be a boat, motorcycle, car, or in my case, a rifle.
For those of you who don't already know, I was a late comer to theater and was subsequently forced to carry the outdated M16A2 rifle since joining the unit. All the highspeed M4's assigned to my company were already given to soldiers who had deployed with the unit, so I've lugging around this "musket" for the past 3 1/2 months! Yes, I could've been a jerk and demanded that one of my soldiers give me his, but I just couldn't justify 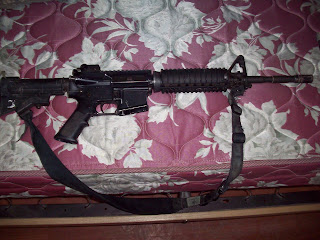 doing that and felt that my time would eventually come.
If you're not familiar with either of these weapons, there's only major differences between them: the M4 is an improved modification of the M16 and is lighter and smaller due to its collapsible buttstock and shorter barrel. In other words, it's a few pounds lighter and about a foot shorter.
I know you're probably wondering why I'm all of the sudden choosing to mention this; well, due to some unfortunate circumstances, a soldier in my company is getting chaptered (read kicked) out of the Army. As luck would have it, I was given her weapon! Although I never really identified my previous rifle (we don't carry guns) as Norma Jean, it's kind of appropriate, as Elton John's ode to Marilyn Monroe is now considered a "classic" (implying that it's old). I hope none of you Sir Elton fans take offense to this. Honestly, that song and "Hey There Delilah" by the Plain White T's were just the first two things that came to mind when I was given the news of my even trade.
When I signed the hand receipt for my new "friend", I felt a huge weight being lifted off my shoulders....because a huge weight had been lifted off my shoulders!
I really do hate the unfortunate situation through which I acquired Delilah, but I honestly feel like it was the best course of action for this soldier and the Army. I ask that you pray for this soldier finds the Lord and is able to get her life back on track.
Hope all of you enjoyed your weekend and are well refreshed for the upcoming week. Take care.
Posted by JC at Monday, October 06, 2008

We'll have to buy some civilian versions of those and have shooting comps when you get back. Stay strong!