Well, I made it through the Dining-In ceremony with a) my dignity in tact and b) less money than I went there with! Unforunately, I cannot say the same for a handful of my peers.
Just as I expected, there was excessive drinking and "friendly" banter between the Armor and Infantry officers, as well as a plethora of "fines" for not saying and or having the required materials for the events. I guess one of the advantages of being a Loggie in that environment is you don't really have a dog in the fight and most people ignore you because you're not a "combat" officer. Frankly, I would much rather be invisible to everyone in the room if it means I don't get hazed for simply being a Lieutenant.
The only hazing I received was during the filling of the "Grog". As I stated in the previous post, the Grog is a concoction of about 10 different liquors and I was tasked with adding the Jagermeister. Each liquor symbolizes a period in our unit's military history and I was responsible for commemorating our unit's push into Germany during WWII (hence, the Jagermeister). Well, traditionally each individual is supposed to chug some of his respective beverage before pouring it into the bowl. I, however, do not partake in such an activity and was subsequently booed by the crowd for not indulging. I took it in stride and made my way back to the little corner where I attempted to hide for the rest of the evening.
The other major event was receiving our combat Spurs. This ritual consists of soldiers getting in the front leaning rest position (layman's terms, the push-up position) while our company commander slid on the spurs to our heels. Aside from being in our dress uniforms and the floor being covered in spilled Grog, it wasn't too disconcerting.
All in all, it wasn't the most miserable night of my life, or even my time in the Army; yet, it was nowhere near as exciting as a nice, romantic evening with the Mrs.
Take care. 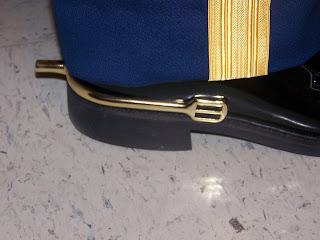