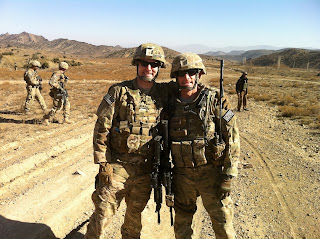 In the Spring of my Junior Year at Maryville College, I pledged the Mu Chi chapter of Delta Kappa Epsilon. Despite being in a national service Fraternity while at CNC (Alpha Phi Omega), I was in search of an organization at my new school that promoted both public service and brotherhood. I definitely got that when I pledged and became a Deke.
It's been almost 10 years since I graduated from college, and I am sorry to say that I've lost touch with many of my "brothers". However, shortly after arriving in East Paktika I found out that LT Patrick King, of the United States Navy, was more than just a co-worker and office mate. In 2005, Pat graduated from Virginia Tech, where he was a member of the Sigma Alpha chapter of DKE!
These past few months have been somewhat tumultuous, but it's been much easier to bear with a fellow brother. Although we're from two different branches of military service, and frequently bash each other's chosen path, our relationship is eerily similar to those guys who I considered my family back in college. It's good to know that brotherhood can transcend stages of life.
Posted by JC at Sunday, December 11, 2011

I hope you know there is an alumni page for mu chi on facebook. If I could help in anyway you're more than welcome to email me @ DUKEDAWGMAN2@AOL.COM . VIVA LA DKE!